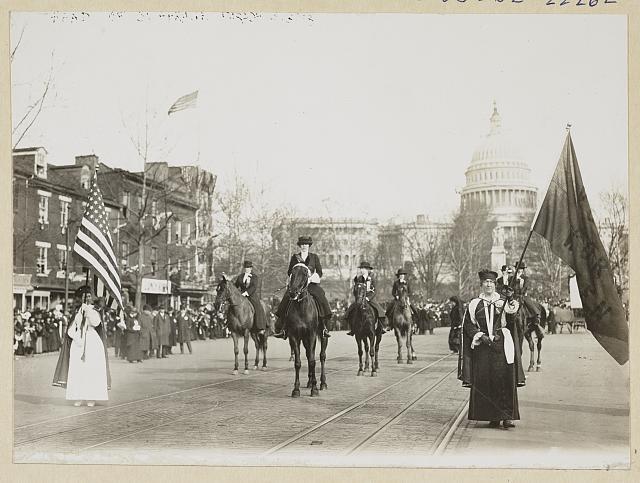 In 1913 a new energy filled the suffrage movement. In West Virginia, another attempt to enfranchise women by amending the state constitution passed the House of Delegates but was narrowly defeated in the Senate. Nationally, the next generation of suffragists such as Alice Paul stepped into leadership roles, implementing fresh campaign strategies. One of most effective was the grand Woman Suffrage Procession, held in Washington D.C. the day before Woodrow Wilson’s inauguration. Well over 10,000 women, representing states, organizations and countries, paraded in an orderly fashion through the streets of D.C. West Virginia was represented by over 20 well known suffragists. Among them were Dr. Harriet Jones, Mrs. Jessie Manley, and Mrs. P.C. Mc Bee.

West Virginia celebrated its 50th birthday in 1913 and festivities were planned in cities across the state to mark the grand occasion. A two-page Wheeling advertisement found in the WVRHC Printed Ephemera Collection boasted that the Golden Jubilee in Wheeling will be the “Greatest Celebration Ever Held in the Ohio Valley.”  The last item in the schedule of events on the second page advertised “Burlesque and Fantastic Parades” and in all caps, “DON’T MISS THE RUBBER NECK SUFFRAGETTES.”

Suffragists were outraged about a proposed burlesque “rubber neck suffragette” parade and threatened a boycott of the Semi-Centennial festivities. Noted West Virginia suffragist Dr. Harriet B. Jones declared the parade “an insult to every woman in the state.”  A large women’s suffrage parade had taken place in Washington, D.C. only a month before.  This event appeared to lampoon it. Women’s rights advocates in Wheeling were angry about the reflection of their “cause and their sex.”  Suffragists demanded that the parade be immediately removed from the program and it was.

This was a small victory for West Virginia suffragists, but they still faced judgement in the local newspapers. A cartoon on the front page of the Wheeling Sunday Register, May 25, 1913 shows a “sweet girl graduate” being pulled by a suffragette away from love, marriage, and happiness towards a career and the unknown.

The day following the publication of “The Ways to Go” cartoon, the Wheeling Register printed a letter to the editor from “A Suffragist Tho’ Married” who objected to the cartoon saying it was “direct slap at all suffragists and decidedly in error.” She asks, “are all married women happy?” and “do all you men insist that marriage and suffrage cannot walk hand in hand?”  The letter write also notes that the Register had been progressive, but not on this issue.  She implores them to change. 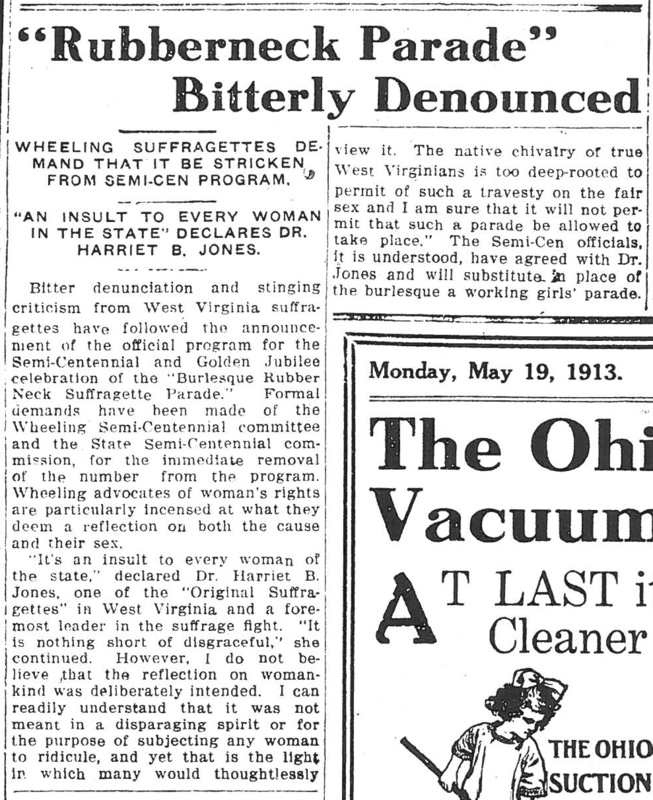 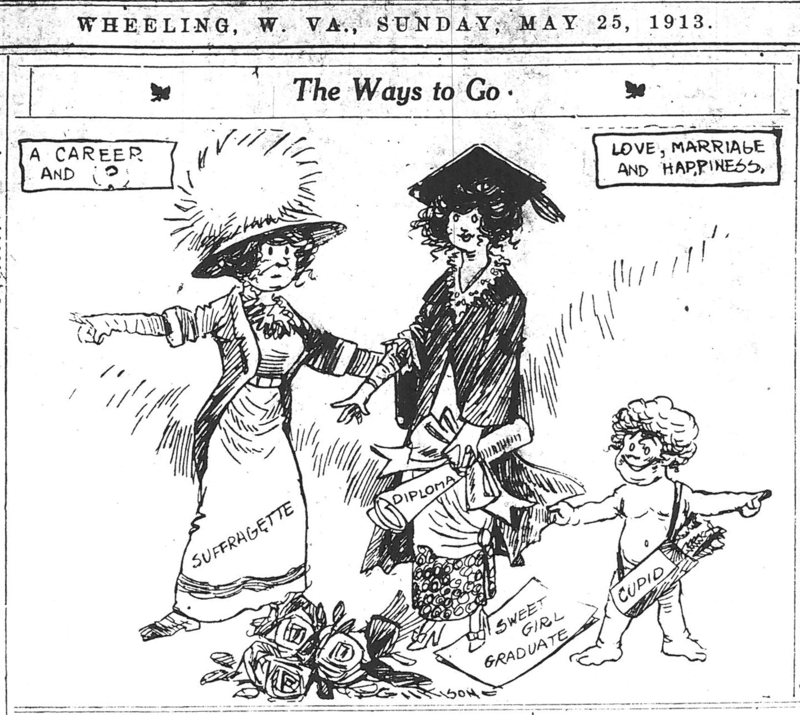 "The Ways to Go" Cartoon

Suffragist Objects Letter to the Editor